Hundreds of species of birds pass over Pearland on their annual migrations from Mexico to Canada. Herons, Warblers, and Bald Eagles are just a few of the sights to behold from your vantage point at Pearland RV Park.

Pearland is situated within a major migratory route and home to everything from grasslands to wetlands. Occupied by hundreds of species, Pearland’s mild autumn weather makes this an ideal time to relax outdoors and connect with nature.

Located just 20 minutes south of downtown Houston, Pearland is home to urban areas and wetlands where 130 species of birds have been identified. This part of the Gulf Coast is within the Clear Lake Loop of the Great Texas Coastal Birding Trail, where as many as 420 types of birds have been spotted.

When you visit during the fall migration season, you will see birds traveling from Central and South America to Canada. Bring your binoculars. 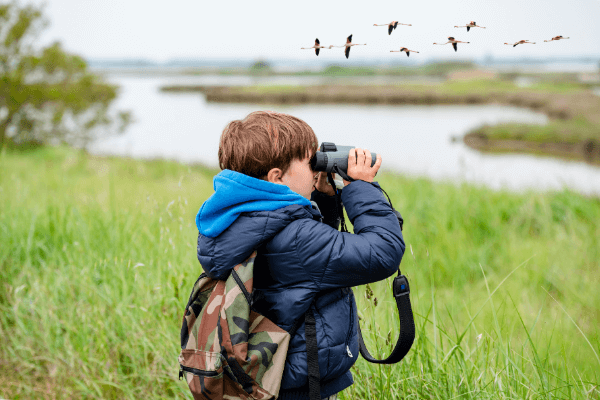 Pearland covers about 50 square miles, a stretch of land that’s a microcosm of the many habitats that you’ll find in the inner Gulf Coast. Start your bird watching adventure on the shores of our own scenic fishing lake, where you may see herons or egrets.

Forge further into the wetlands at the John Hargrove Environmental Complex & Wetlands, and catch a glimpse of a Roseate Spoonbill. Visit at dusk or dawn to see hundreds of birds coming or going from their nests in this protected rookery.

So many beautiful birds and birdsongs. Here’s a checklist to help you get started…

More Things To Do In Pearland

One of a kind – don’t miss it! John Milkovisch, a retired upholsterer for the Southern Pacific Railroad, started his project now known as the Beer Can House in 1968 when he began inlaying thousands of marbles, rocks, and metal pieces into concrete and redwood to form unique landscaping features. When the entire front and back yard were completely covered because he “got sick of mowing the grass”, he turned to the house itself and began adding aluminum siding…aluminum beer can siding, that is.

Over 50,000 beer cans were used to create this unique edifice. Did he prefer one brand over any other? His favorite beer was always “Whatever’s on special.”

Take the kids to search for pears, giant-sized, artist-decorated fiberglass pears, that is. Various locations throughout downtown Pearland. Be a detective and find them all.

Well, there you go. Birds and Beer. Golf and Pears. Pearland has everything! See for yourself when you Book Your Stay at Pearland RV Park. Do It Today!